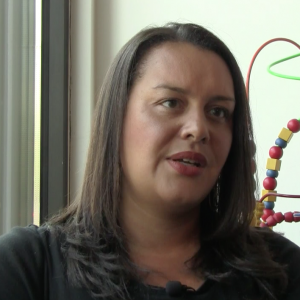 Kari Brown is the owner of Lark Café, located in Ditmas Park, Brooklyn. She lives very close to the cafe and is proud that her business has become a community gathering spot, hosting sing-alongs and story times for families in the neighborhood.

As a small business owner, Kari feels a responsibility for keeping the neighborhood clean and beautiful. She and the other businesses along Church Avenue do their part to pick up in front of their businesses and make sure garbage bins aren’t overflowing. But she also recognizes that waste haulers have a big role to play.

“There have been occasions where we’ve turned up in the morning and garbage has not been picked up for one reason or another,” explains Kari. “It’s a huge turnoff. No customer wants to be coming into a café where there’s stinky garbage right out in front of it.” She has had to face fines and take staff time to bring trash back downstairs during business hours, which is not ideal.

Kari would like more of a relationship—and greater accountability—with her waste hauler. Right now, she doesn’t have a single point of contact, and it’s difficult to get them to respond quickly when there is a missed pick up. She wonders if her business is overcharged for waste hauling, since she produces different amounts of waste, but is billed the same amount each month. “I have no idea if they actually weigh and measure the garbage that I have. We’re not a full-scale restaurant, we’re a café. We don’t have a ton of waste, but it feels like we’re being charged a lot.”

She also has concerns about what happens to her trash and recycling once it is picked up. “We sort our garbage, we sort our paper and plastic and regular garbage in hopes that when we put it out on the corner it gets sorted and recycled. But I don’t really know where it ends up.”

In an ideal world, Kari would like to see a simpler, more transparent waste system where customers receive good service, see that recycling is actually happening, and see reduced environmental and noise pollution from waste truck traffic. “It would be wonderful to have one company who does this one block, so that there aren’t trucks hopping around, going around,” she says. “There aren’t six different trucks and services that service all of our neighbors. That just seems like such a waste.”

“Cleaning up Brooklyn is a really important issue to me,” she says. “It’s not just about the aesthetics but it’s also about our health. There’s something really lovely in being in a clean, lovely neighborhood. And if we could transform the way that we do our garbage as a business owner, that would be really important to me.”