Increasing this rate will be critical if New York is to meet its targets of sending zero waste to landfill by 2030.  It will help the city meet its climate commitment of reducing emissions by 80% by 2050.  Recycling and composting also create far more jobs per ton of waste processed than landfilling and incineration.

Based on a review of official reports from the approximately 30 NYC waste and recycling facilities primarily handling commercial waste (i.e. non-residential waste) located within the five boroughs, Transform Don’t Trash NYC finds that the industry recycles less than a quarter (22%) of the commercial waste stream, roughly on par with their performance in 2015 (construction recycling rates are customarily calculated separately).  In New York City, it is unlawful for waste haulers and processors to landfill materials intended for recycling.

Every year, New York City’s commercial buildings and businesses are estimated to generate about 3.5 million tons of solid waste.  This is in addition to the additional 3.5 million tons per year that are collected by the New York City Sanitation Department; the TDT analysis focused exclusively on the city’s commercial, not residential, waste stream.

The new findings show that current regulations and voluntary commitments from sanitation companies are not enough to raise recycling rates.  The commercial waste zone system, currently being developed by the New York City Department of Sanitation and expected to take full effect in 2022, will give city regulators the authority, and sanitation companies the accountability, necessary to raise New York City’s commercial recycling rate.

Done right, the zoning system will require private carters to meet recycling and waste reduction targets through long-term contracts that will encourage greater investments in recycling and organics.

“Under the status quo, commercial sanitation companies clearly don’t see it as in their interest to increase recycling rates or collaborate with their customers to maximize recycling and reduce waste,” said Justin Wood, Director of Strategic Research at New York Lawyers for the Public Interest (NYLPI). “This has got to change. The new zoning system can get us onto the path of zero waste by 2030 if we ensure that incentives are aligned to reward waste reduction and promote substantial investments in better technology by private waste companies.”

“The results of this new analysis are disappointing.  Decades after the obligation for commercial carters to recycle much of the waste they collect, most of the city’s private carters have implemented this policy half-heartedly at best.  New York’s commercial carting industry will never come close to achieving the city’s ambitious waste and air quality improvement goals without dramatic change,” said Eric A. Goldstein, New York City Environment Director at the Natural Resources Defense Council.

These findings are drawn from best available data from DSNY and self-reporting by the commercial waste industry, which may overestimate the rate of commercial recycling in NYC. The Transform Don’t Trash NYC coalition advocates that the commercial hauling industry receive more oversight to truly improve recycling rates and achieve the City’s Zero Waste Goals.

Many New York City business owners surveyed by Transform Don’t Trash NYC noted that they sometimes instruct their staff to carefully separate designated recyclable materials such as glass, metal, and plastic containers from the waste stream only to observe that private haulers throw recyclables into the same trucks as black-bag waste on late-night collection routes.

Private haulers continue to openly engage in this practice.  These are photographs of commercial waste trucks in which black-bag garbage and commercial recyclables (in clear or blue bags) are mixed.  The photos were taken more than six months after the implementation of the new commercial recycling rules. 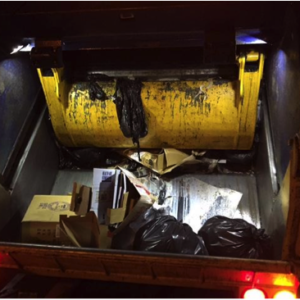 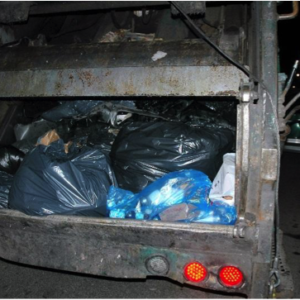 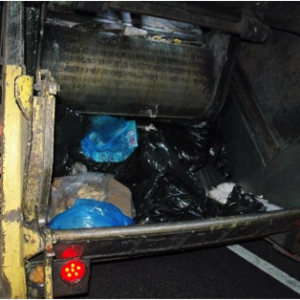 The waste industry’s limited progress in meeting the demand for composting and anaerobic digestion capacity continues to suppress the commercial recycling rate, despite the fact that about one-third of disposed commercial waste is estimated to be potentially compostable or digestible organic material.

In 2016, private transfer stations reported diverting only small amounts of organic material away from landfill (less than 1% of total material handled) – and much of this small amount may have been delivered by DSNY’s residential compost collection trucks rather than private haulers.

Landfilling recyclable glass continues to be the norm for private haulers and waste facilities despite the fact that glass has been designated as a recyclable material by the city since the 1990s.  Landfilling designated materials intended for recycling is inconsistent with the law.

Recycling and waste transfer facilities owned by major NYC haulers such as Five Star Carting, Mr. T Carting, Royal Waste Services, and Action Environmental report to the Department of Environmental Conservation did not report any glass recovery in 2016.

In fact, out of more than 20 New York City Material Recovery Facilities reporting to DEC in 2016, only three reported recovering any glass material from the waste stream.  Notably, only one of these three facilities handles waste from private commercial waste haulers, with the others handling DSNY-collected recyclables and bottle glass from deposit refund centers.

Although the waste industry complains that glass is not a profitable material to recycle, a new study by the Closed Loop Foundation shows that by making an investment in modern sorting equipment, recycling facilities can substantially reduce the costs of processing glass from $35 per ton to $8 per ton by effectively recycling glass instead of exporting it to landfills.