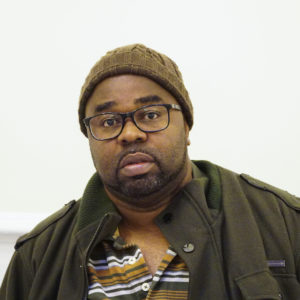 For nine years Orrett Ewen worked as a helper for Sanitation Salvage, a carter that primarily serves customers in the Bronx and is one of the largest in the city. He was required to work for 16 to 17 hours a night, picking up trash at over a thousand businesses.

He worked on poorly maintained trucks that often broke down during shifts. Besides falling off of trucks and being hit in the head by broken containers, Owen experienced debilitating fatigue.

“There were times when I would be hanging on the back of a truck and not know how I got there,” he says. “My brain was so tired I just couldn’t remember. And the driver behind the wheel was working the same hours that I was.

“It’s part of a bad safety culture. If you complain about being overworked, they will give your shifts to someone who won’t complain. Private sanitation workers learn to shut up about safety so we can keep our jobs.”

Owen recounts a time he was stuck by a needle that could have been infected. He had to pay out of pocket for antiviral medication and then fight with the company’s insurance to get reimbursed. In the nine years Ewen spent at his company, he was only provided two safety classes.

Ewen hopes that the city cleans up the industry soon.

“Anyone who tells you everything is fine in the garbage industry doesn’t know what they are talking about, or is pulling the wool over your eyes. There are big problems and the City needs to do something. I’m glad that the Department of Sanitation is standing up for workers and trying to give us shorter routes. We also need new rules so that companies won’t be able to get a zone without taking safety seriously. That will make a big difference toward having an industry that is safer for workers.”