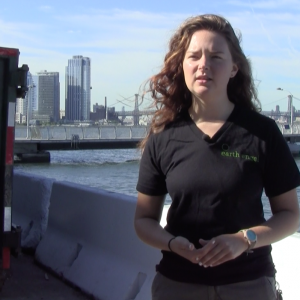 Emellie O’Brien is the co-founder of Earth Angel, an environmental consulting company for the film and television industry. Emellie started Earth Angel two years ago after witnessing firsthand the urgent need for environmental practices on film sets. Earth Angel helps productions reduce their environmental impact and give back to the community.

Productions are transient, fast-paced, produce a tremendous amount of waste, and can leave a big impact on communities. “We normally feed about 1,000 people over the course of one day, and that creates a lot of waste, so we implement food composting, we donate all of our leftover food at the end of every meal to local shelters, we implement recycling initiatives, and we dispose of everything including excess set materials responsibly and properly,” says Emellie.

She notes, “A lot of people are under the impression that it costs more to run a sustainable set, which we’ve actually proven is false. When these initiatives are done properly, it actually saves the production money.” As people in the film industry become more aware and see the benefits of running a sustainable set, the demand for environmental consulting services is growing.

In the past, Emellie points out that there was not much concern for the environmental impact the film industry leaves behind, but that is beginning to change. A lot of what her company does is education; she meets with every single department on set about their specific needs, explains composting and talks about how the production can reduce waste.

One of the most critical issues she tackles on sets is waste hauling. “How do we really know that when we set our garbage, recycling and compost on the side of the street every night, that it´s actually going to where they say it´s going?” She feels that New Yorkers have a very jaded attitude towards waste hauling. “They feel as though it all goes to the same place anyways, so why bother. Which was unfortunately the truth for many years.”

Emellie thinks it would help to have a more trustworthy, transparent system between the haulers and their clients. “I think if commercial waste haulers were held to higher standards it would mean a huge, huge difference, not just to the film industry, but to New York as a whole,” says Emellie. She believes the mayor and the City Council should prioritize changing waste hauling standards in New York. “There’s absolutely no reason why we can’t get our waste system on a more sustainable track.”