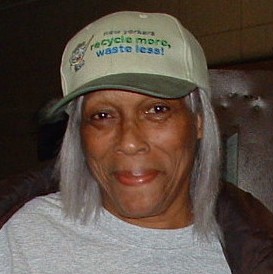 Sarah Martin has lived in Harlem for nearly sixty years and has seen a lot of changes during that time. There are many things that keep her living in the neighborhood, but she also admits, “I don’t like walking around the area: the smell, the garbage, the trash—the quality of life that a lot of us are living leaves a lot of room for improvement.”

The neighborhood is a busy commercial corridor with lots of truck traffic and commercial waste. It’s also close to a sewage treatment plant. “We have a lot of truck traffic moving through our community,” says Sarah. “There’s a law that’s supposed to direct trucks the right way, but they go and take short cuts. Therefore they go through our communities, and the law is not being enforced.”

Sarah suffers from chronic asthma, and environmental triggers prevent her from leaving her home some days. “Clean air needs to be addressed. This is the dirtiest city I’ve ever been in in my life,” she says.

Through the Morningside Heights/West Harlem Sanitation Coalition, Sarah has been working to improve quality of life in the community, and has seen some progress in reducing waste and pollution. She lives in the Grant Houses, a public housing development, and works closely with neighbors from the middle-income co-op development across the street. “We started doing little things like taking looks at vacant lots where there was so much debris and garbage piled up. We would track down the owners and hold them responsible for clean-up. Then we addressed things like rats, because we shared rats. Our rats went over there, and their rats came over here. So we joined forces.”

Sarah is concerned about the impacts of waste beyond her neighborhood and believes people need to join forces on a larger scale. She says, “We all make garbage—we all should be responsible for it. The private sanitation trucks still dump in poor people of color neighborhoods. It’s an injustice. I’m concerned about quality of air, clean air, equity when it comes to trash. And holding people accountable. That would make a better community, a better city.”