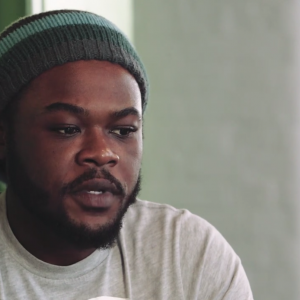 Stephan Smith is a life-long resident of Hunts Point in the South Bronx and has witnessed how waste transfer stations have decimated his community. The stations can be seen, often covered in a grey haze of toxins, smoke and particulate matter. In talking to his neighbors, Stephan realized: “Most people don’t even know what a waste transfer facility is. They are simply living here and receiving poor air quality and don’t even know why.”

Hunts Point has one of the highest asthma rates in the nation, something which touches Stephan personally. “I’m asthmatic. I was not born asthmatic, but I became asthmatic by the time I was six,” he says. Monstrous garbage trucks drive through residential areas and past schools, transporting dangerous materials and speeding, posing a danger to residents. According to Stephan, “A lot of times they’re rushing. They speed. It makes our community dangerous for kids to live for fear of being struck, or not even being able to develop properly because they don’t have clean air to breathe.”

Stephan believes that increasing recycling would be extremely meaningful for people in his community because recycling will keep the streets clean. “People get accustomed to being around garbage and accustomed to just leaving garbage where it is, because that’s all they see around them,” he says.

He would also like to see more recycling jobs for people in his neighborhood, which has one of the highest unemployment rates in New York. “I think waste transfer stations should produce safe and high quality jobs, sustainable jobs for people in the area. Jobs that you can actually make more than ends meet with. Jobs where you can actually come home and provide for your family and not worry about your health or being at risk or being in danger, while trying to make a living for yourself,” says Stephan.

“I feel like the issue is urgent,” Stephan says, “because it has an impact on people’s health. And something that directly impacts your health should be treated with urgency. When you go to the doctor’s office and the doctor tells you that you have a condition, you don’t sit on it and wait on it. You treat it with urgency and you try to get to the source of it before it breaks you down—before it becomes a bigger issue.”