Following the rally, the groups testified at the City Council Sanitation Committee hearing on “Sustainability in the Commercial Waste Industry.”

“It is time to change course,” said Matt Ryan, Executive Director of ALIGN. “As a city, we are generating more waste than ever, approximately 5.5 million tons per year. It is not acceptable to manage this amount of commercial waste with an ancient and inefficient system. If we do not adopt a productive, safe, and sustainable commercial waste management system, we will continue to live with the problems that plague us now—contaminated air, dismally low recycling rates, and unsafe working conditions.”

Last week, Mayor de Blasio made ‘Zero Waste’ the centerpiece of his long-term sustainability agenda, OneNYC. The plan aims to reduce commercial waste by 90% through increased recycling. It also commits the City to study commercial waste collection zones, which other major cities have used to boost their recycling rates and improve conditions for workers and local communities.

“As a representative of North Brooklyn, which processes about 40% of the city’s trash, and as Chair of the Committee on Sanitation and Solid Waste Management, it’s particularly important to me to address issues in the commercial waste industry,” said Council Member Antonio Reynoso. “With OneNYC, we now have a goal from the de Blasio administration to reduce the amount of commercial waste sent to landfills by 90% by 2030, and we are going to need major changes to our current system in order to get there.  I want to work proactively with both advocates and industry to help achieve that goal and make real improvements.”

“The OneNYC plan has rightfully identified improving the commercial waste disposal system as one of New York’s most pressing sustainability priorities,” said Council Member Brad Lander. “Our restaurants, offices, and business generate 5.5 million tons of waste each year, and most of that ends up in landfills and incinerators. We can do better. We need to work to increase commercial waste recycling rates, improve job quality in the sector, and work to create smarter more efficient truck routes. As OneNYC points out, New York should learn from improvements made in cities like Los Angeles and San Jose. I’m glad the city has committed to studying this issue, and I look forward to hearing ideas for improvement at today’s hearing.”

“OneNYC sets an ambitious but achievable goal to drastically reduce the amount of New York City commercial waste sent to landfills,” said Justin Wood, community organizer at New York Lawyers for the Public Interest.  “The plan underscores the urgency of reforming an inefficient commercial waste system that recycles far too little and pollutes far too much.  Thousands of private diesel garbage trucks needlessly drive more than 50 million miles per year on our streets as they collect waste from customers scattered throughout the city, exposing communities and workers to health and safety risks every night.”

A recent report from Transform Don’t Trash NYC found that recycling rates are far lower than previously believed. Only 25% of what private sanitation companies collect gets recycled – and the real rate may be even lower.

“New York City’s inefficient, and polluting commercial waste system is both disproportionately burdensome on low-income communities of color, and dangerous and exploitative for workers,” said Eddie Bautista, Executive Director of NYC Environmental Justice Alliance (NYC-EJA). “Commercial recycling rates, estimated at 25% by a recently uncovered City study, are shockingly low (and possibly far lower than estimated). With last week’s release of OneNYC, Mayor de Blasio announced a goal of Zero Waste for NYC by 2030 and committed to conducting a comprehensive study of commercial waste collection zones. As part of the Transform Don’t Trash coalition, the NYC Environmental Justice Alliance is committed to working in partnership with City Council and the Mayor’s Office to make good on the OneNYC goals by massively reducing inefficiencies and increasing recycling in the commercial waste sector while creating thousands of good jobs.”

Local communities bear the brunt of the industry’s pollution. With hundreds of separate companies competing for business across the city, dirty diesel garbage trucks crisscross each other every night while driving inefficient routes that pollute the air and wreak havoc on city streets. Sanitation facilities are concentrated in the South Bronx, North Brooklyn, and Southeast Queens, so those neighborhoods are hit hardest.

Rebecca Rosado of THE POINT CDC said, “Our community of the South Bronx and others like it across the city have been in the shadows, dealing with the disproportionate impact of handling the majority of the city’s waste for decades. Overhauling our commercial waste system in favor of programs like Transform Don’t Trash provides long overdue relief to the three communities that handle three-fourths of the city’s waste. Sustainably restructuring our city’s commercial waste sector is good for the environment, good for our communities, good for workers, and good for commercial businesses. With these changes, the Bronx and communities that share our struggle will be breathing again!”

“New York generates millions of tons of waste at a significant cost to the City, and an even heavier toll on the environment,” said Council Member Ritchie Torres of the Bronx. “Reducing greenhouse emissions and implementing a more equitable waste management program means ensuring that our sanitation workforce has access to quality jobs that pay fair wages.   I am proud to stand with my partners in labor and in the community in calling for greater sustainability in the commercial waste industry.”

Sanitation workers joined the rally to speak out against low pay and dangerous conditions. Sanitation is one of the most dangerous jobs in America, and many private sanitation companies send employees on the job with little-to-no safety training.

George Miranda, President, of Teamsters Joint Council 16 said, “Private sanitation workers deserve good wages and safe jobs. They also want to work for companies that care about recycling and clean air. Mayor de Blasio has pointed our city toward solving these problems through OneNYC. We thank Chair Reynoso for his leadership on this issue and urge the City Council to rein in private sanitation.”

“This initiative would help to improve the safety and wages of sanitation workers around the City,” said Vincent Alvarez, President of the New York City Central Labor Council, AFL-CIO.  “As our city continues to grow, so does the amount of waste generated.  A cleaner city is a healthier city, and by streamlining waste collection services, and increasing our recycling capacity, we would be able to help improve the health and safety of working people around New York City.”

Small business owners said they were speaking out because they want transparency for the rates they are being charged and they want to know that their recycling is actually recycled. Sometimes, the poor service turns abusive.

“Small Business Owners deserve protection and support against these types of fraud and abuse,” said Javier Salazar, owner of Victoria Deli in Bushwick, Brooklyn.  “As an immigrant entrepreneur, I am in a particularly vulnerable position. My garbage hauler intimidated me into signing a contract in English that I could not understand. When I would call to ask them to do their jobs and collect garbage on time, I was yelled at and abused. When I tried to switch garbage haulers, I was sued for breach of contract. For the last year, I have been fighting these haulers in court for the simple right to receive quality services and be treated with respect.”

“Many people refer to the New York City commercial waste industry as the ‘wild west,’” said Joan Levine, of the Morningside Heights/West Harlem Sanitation Coalition. “This certainly seems to be true of our neighborhood, Morningside Heights/West Harlem. In a survey conducted by The Morningside Heights/West Harlem Sanitation Coalition in 2014, the commercial strip on the west side of Broadway between La Salle and 125 Street had approximately 7 different commercial carters for 22 stores.  I redid this survey on April 25, 2015 to see if anything had changed, and found at least 11 different commercial carters even though two more stores were now vacant. In addition, many store owners seemed to have changed carters since 2014. This shows how inefficient, crisscrossing commercial waste routes create unnecessary levels of truck traffic and diesel exhaust in our communities.”

“Our neighborhoods have suffered the consequences of the poor commercial waste system, traffic congestion, and poor air quality from haulers and diesel emissions from trucks,” said Luis Garden Acosta of El Puente. “The community of North Brooklyn, including our Williamsburg, Bushwick, and Greenpoint neighborhoods, demands a more sustainable and equitable system that will reduce waste and reduce impacts on low-income communities and communities of color. It’s a real waste to treat our communities as New York’s wasteland, a receptacle for waste!” 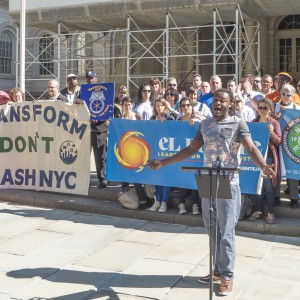 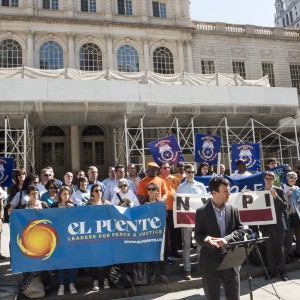 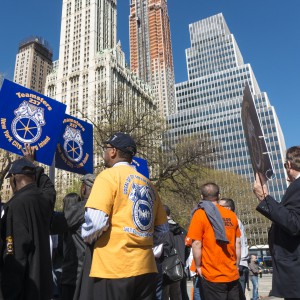 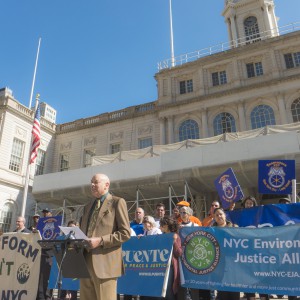 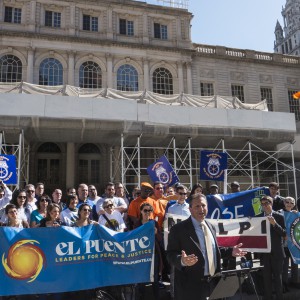 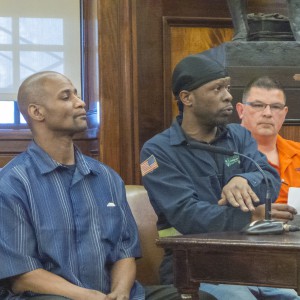 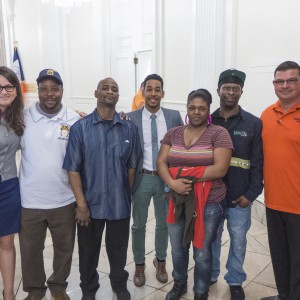