Just Jobs In Waste: Workers Speak out in Support of a Seven-Point Plan to Fix New York’s Commercial Waste System

New York City has the chance to turn private sanitation jobs into great jobs if it supports a seven-point plan to fix the city’s commercial waste system, say front-line workers from around the United States in a new report issued today by the Transform Don’t Trash NYC coalition. 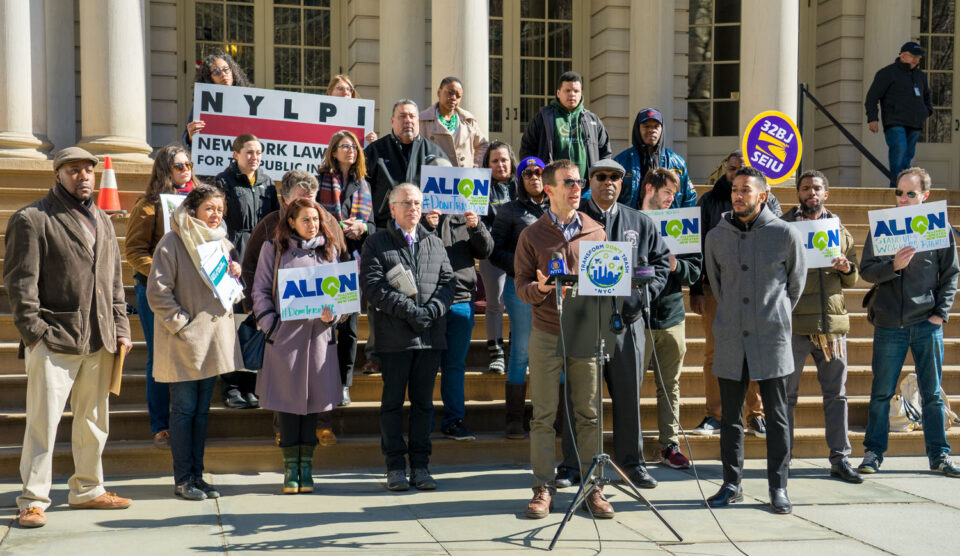 The report features interviews with seven workers in the sanitation industry from around New York and the rest of the country, highlighting how waste jobs can be safe and family-supporting jobs.

Many of the workers began their careers in sanitation working for low-road employers who resisted union organization and endangered worker safety, like Sanitation Salvage, the now shuttered company which tried to cover up the death of off-the-books employee, Mouctar Diallo, in November 2017.

The workers say there is much to praise in the commercial waste zone plan being finalized this year by the New York City Council and the City of New York Department of Sanitation. But they believe the City should structure its plan with “exclusive waste zones,” in which the City would assign one hauler to each commercial zone, holding them to labor, environmental, safety, and pricing standards through a competitive bidding system.

Right now, exclusive waste zones remain outside the scope of the city’s plan.

The workers say that New York must:

“NYC needs good union jobs, NYC needs cleaner, safer trucks, and NYC needs safe streets.  The commercial waste zone policy is an unprecedented opportunity to tackle these issues in one common-sense reform.  An exclusive zone system with high standards will be a win for workers, a win for our environment, a win for our communities, and a win for MWBEs and innovators in the waste industry,” said author Justin Wood, Director of Organizing and Strategic Research at New York Lawyers for the Public Interest.

“Some people might think that the workers who sort New Yorkers’ trash don’t deserve good jobs. But this is hard work and important work. New York will not reach our climate goals if not for the work I and my colleagues are doing at Sims. And with our union, we are showing that this can be a good job, too,” said Jessica Yance, crane operator at Sims Municipal Recycling and Teamsters member.

“It’s fitting that we are releasing this report the same month that Martin Luther King Jr. visited with striking sanitation workers in Memphis in 1968. Sanitation workers have been on the front lines of the struggle for racial and economic justice for decades. Far too many continue to toil in a dangerous, unpaid, and under-appreciated profession that is absolutely essential to the public health of our city. They deserve more – safe working conditions, reasonable hours, and union protections,” said Maritza Silva-Farrell, Executive Director of ALIGN.

“Too many companies treat private sanitation workers like the trash they pick up. An exclusive commercial waste zone system presents an opportunity to transform these jobs and guarantee that every sanitation worker in New York has a safe job, fair pay, and respect at work,” said Sean Campbell, President of Teamsters Local 813.

“The horrendous working conditions within the private carting industry are best conveyed by the workers who have experienced them. The Transform Don’t Trash NYC coalition’s Just Jobs for Waste Workers report puts a human face on the dangerous and grueling working conditions present within the private sanitation industry. The report uses workers’ lived experiences to highlight the urgency for reform of this industry through the implementation of a comprehensive waste zoning framework. I thank the coalition for releasing this report, and I look forward to continued collaboration in transforming the private sanitation industry,” said Council Member Antonio Reynoso. 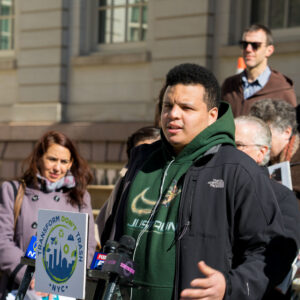 “There is a big difference between working for a company that’s non-union and working for a company that has a legitimate union like the Teamsters. I make $24 an hour and I work eight hours a night. They give me work gloves, a uniform, and everything I need to do my job. I have good healthcare and a retirement plan. I can take time off when I am sick. I can take vacation to relax and recover. Above all, I am treated with respect, like a human being. Every sanitation worker in New York City deserves to be treated like this. I hope that one day soon we all will,” said Anthony Carmona, helper at Waste Connections and Teamsters Local 813 member.

“This report shows that there is a better world possible, one where we do not subject the people and communities who handle the waste we generate to deplorable conditions. Within New York City’s current unwieldy and inefficient commercial waste collection system, carters are allowed to de-prioritize the health and safety of a predominantly young male of color and immigrant workforce, causing them high rates of illness and injury. Environmental justice includes justice in the workplace, and an exclusive zone system in New York City could finally ensure the highest standards of oversight and protection for our workers and communities who – for many companies in this industry – have themselves been deemed disposable,” said ‘Tok’ Michelle Oyewole, Ph.D., Policy & Communications Organizer, NYC Environmental Justice Alliance

“Last week’s crash involving a private carter hitting over a dozen cars in the Bronx demonstrates that there are still serious safety issues in this industry. This new report provides real world examples of commercial carting companies that are treating their employees fairly and equitably, and demonstrates that the best route to bringing about such an industry-wide transition in New York City is via adoption of exclusive waste zone legislation,” said Eric A. Goldstein, NYC Environment Director at the Natural Resources Defense Council.

“FABSCRAP works with nearly 300 fashion and interior design businesses to divert commercial textile waste from landfills. I appreciate the proposed requirement for commercial haulers to provide financial and logistical support to local, specialty micro-haulers, like FABSCRAP. A strong commercial waste zone system should recognize our contribution to advancing the City’s zero waste goals, allow us to scale and add to our workforce, and provide specific opportunities for minority and women-owned business enterprises (MWBEs) like ours,” said Jessica Schreiber, Executive Director of FABSCRAP INC.