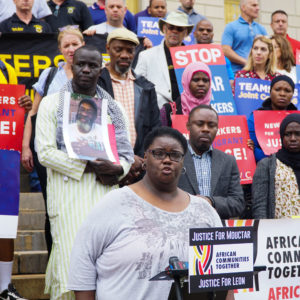 Leaders of African immigrant communities are calling on the City to revoke the license of Bronx trash hauler Sanitation Salvage. Last November, the company was involved in the covered-up death of Guinean immigrant Mouctar Diallo. On Wednesday, leaders in the Guinean and other African communities held a press conference on the steps of the Bronx Supreme Court, alongside supporters from the Teamsters Union, immigrant rights organizations, and sanitation reform advocates.

The community is also demanding that the driver be punished and that the company apologize to the family of Mouctar Diallo for covering up his death.

“We understand accidents happen at any workplace. What we don’t understand is the lack of responsibility. Why is Sanitation Salvage refusing to take responsibility? Is it because Mouctar is an African immigrant that he is treated like a nobody? Well we have news for them. Mouctar Diallo was not and has never been trash,” said Mamadou M. Bah, President of Guinean Community. “He is our son, our nephew, our brother. He was loved and cherished. He was his mother’s hope and dreams. We will not rest until Sanitation Salvage takes full responsibility for their actions.”

“The death of Mouctar Diallo should be a wakeup call to all Africans in the city to stay vigilant, to not stay silent, and to demand action whenever there is injustice. Sanitation Salvage must be held accountable for their actions,” said Bourema Niambele, Vice President of Muslim and Immigrant Coalition for Justice (MIC4Justice). “The life of Mouctar Diallo is just as valuable as anyone else’s, and we will fight to get the justice that he deserved.”

Diallo was a 21 year old immigrant from Guinea, who had been working off-the-books on a Sanitation Salvage truck, collecting commercial trash, for over a year. When he was run over by the truck he was working on in November 2017, police were originally told that Diallo was unknown to the company and he was reported to be a “crazed homeless person.”

“Sanitation Salvage cannot treat its workers worse than than the trash it discards. We stand in solidarity with African and all other immigrant workers in their fight for safety, respect, and justice for Mouctar Diallo,” said Steven Choi, Executive Director of the New York Immigration Coalition.

The driver who ran over Diallo and participated in the cover-up continued to work for the company and then, April 27, 2018, hit and killed 72–year-old Leo Clarke (known as Leon to his neighbors). Clarke, a resident of the John Adams Houses, was crossing the street mid-block with a cane.

“Leon Clarke was a beloved neighbor with many friends in the community. He should still be alive,” said Ronald Topping, President of the John Adams Houses Tenants Association. “I hope Sanitation Salvage will admit that what they did was wrong. The truth shall set them free. Now we can begin to heal.”

Recent media investigations have exposed flagrant worker rights violations at Sanitation Salvage. Workers told ProPublica that they work shifts as long as 18 or 20 hours. Off-the-books workers are often hired off the street and are paid $80 a shift or less, workers say. The company has been hit with lawsuits over unpaid workers compensation and wage theft. 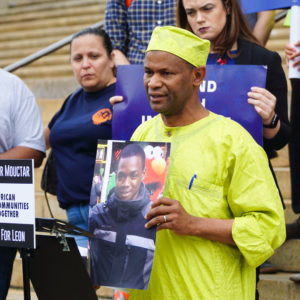 “Sanitation Salvage treats workers and community members like they are disposable. It’s unacceptable,” said George Miranda, President of Teamsters Joint Council 16, which represents sanitation workers in New York. “New York City should give these families justice and take away Sanitation Salvage’s license. Further, the City should implement the strongest reforms possible to force the other bad companies in the industry to shape up or move out.”

City regulators and law enforcement have known for months about the cover up of Diallo’s death. The Business Integrity Commission, which is charged with licensing and regulating the private carting industry, has the power to suspend a carter’s license if the company “creates an imminent danger to life or property.” The BIC has said it is investigating, but no action has yet been taken against the company.

The revelations of abuses by Sanitation Salvage come as City leaders consider reforms to the industry. Legislation in the City Council, sponsored by Council Members Stephen Levin and Antonio Reynoso of Brooklyn, would cap the amount of trash that can be dumped at waste transfer stations in the South Bronx and other overburdened neighborhoods, with the goal of reducing garbage truck traffic in the communities.

Mayor Bill de Blasio committed two years ago to transform the industry through a commercial waste zone policy that would limit one carter to each zone of the city, improving accountability while decreasing truck traffic and speeds. Under pressure from carters like Sanitation Salvage, the Department of Sanitation has indicated it may weaken the policy, but advocates are calling on the City to recommit to reforms.

“In 21st Century New York City, it’s tragic and unacceptable that two people – 21-year-old Guinean immigrant Mouctar Diallo, and 72-year-old black Bronx resident Leon Clarke – died within six months under the wheels of garbage trucks owned by the same company, and still we see no accountability,” said Maritza Silva-Farrell, Executive Director of ALIGN. “The night-time collection of commercial trash is a broken system. It operates in stark contrast to the day-time collection of residential waste, which has not seen a death since 2014. It’s only through systemic reforms – in the form of exclusive commercial waste zones – that we will see the improvements for workers, for the environment, and for safety on our streets that are so desperately needed.”